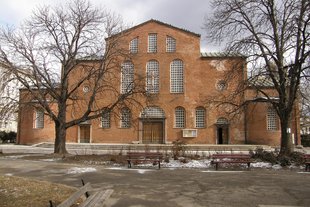 This church is the oldest one in Sofia.

It was built over the  remains of churches from Roman times.

Its bell is put on a tree in front of the main entrance. During thanksgiving in meeting Russians in Sofia the bell has been right in the same place. This happened in honor of Bulgaria’s liberation from Ottoman rule.orologi replica

The Bulgarian writer Ivan Vazov is buried in the garden side of the church.


Church Saint Sofia is among the most important churches in South-East Europe.

Church Saint Sofia is close to many other landmarks such as Saint Alexander Nevsky Cathedral, The President Hall, The National Assembly Hall, the Archaeological museum.